Sir Elihu Lauterpacht has had a distinguished career in international law, combining teaching and practice on an extensive scale. He was called to the Bar in 1950, became a QC in 1970, and has practiced extensively before the International Court of Justice and other international jurisdictions, as well as before the English courts. He was ad hoc judge in the Bosnia case before the International Court, has been an arbitrator in NAFTA, ICSID and other arbitrations, the President of the East African Market Tribunal, and a member of the Panel of the UN Compensation Commission, the World Bank and Asian Development Bank Administrative Tribunals and of the Eritrea-Ethiopia Boundary Commission.

Sir Elihu's appearances before the International Court of Justice includes the Nottebohm case in 1953, the North Sea Continental Shelf cases, the Constitution of the Maritime Safety Committee, the Barcelona Traction case, the Nuclear Tests cases, the Qatar-Bahrain case and the Sipadan and Ligitan case.

He has left a permanent mark on international law through his work as author, editor and innovator. In 1956 he started the British Practice in International Law, the forerunner of similar publications in a number of other countries, from which there subsequently evolved in other hands the United Kingdom Materials on International Law. He became editor of the International Law Reports in 1960, and inaugurated the Iran-United States Claims Tribunal Reports in 1983 and the ICSID Reports in 1993. He has lectured at the Hague Academy of International Law and is a member of the Institut de Droit International. He remains actively involved in practice, particularly in investment and territorial disputes, as well as in the work of the Centre as its Director Emeritus. He was knighted in 1996.

His professional activity has generated a huge mass of learned opinions and drafts which form a unique archive that will in due course be available at the Centre. His published academic works include Jerusalem and the Holy Places (1968), The Development of the Law of International Organizations by the Decisions of International Tribunals (1976) and Aspects of the Administration of International Justice (1991), as well as numerous articles. He has systematically arranged and edited International Law: the Collected Papers of Hersch Lauterpacht, the fifth and final volume of which was published in 2004.

Maurice Mendelson QC, Consultant Moderator for TDM's sister electronic publication, OGEMID, prepared this TDM Special Issue. For subscribers the chapters are available as individual papers, see the table of contents here. All others may download the combined papers as a free download below. 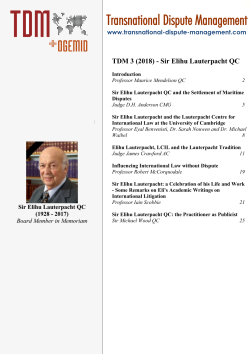 Article(s) by this author:
(Most recent first)

Panel Five: The Pros and Cons of an International Appellate System, an introduction