Initiated by Tony Cole, Senior Lecturer Brunel Law School at the time, the goal of these (mini-)seminars is to spur close analysis and vigorous discussion of current and recent cases. Four to five invited panelists, from both practice and academia, are invited to post short (500-1000 words) analyses over the course of a few days, generating useful comments and feedback from OGEMID members.

If you have any suggestions for topics or an OGEMID seminar feel free to contact us. You can learn more about OGEMID here. 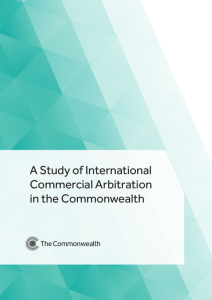 The Commonwealth Study into International Commercial Arbitration provides the rare opportunity to assess the state of international arbitration, ie its challenges and its promises, in a unique ecosystem. This unique ecosystem enjoys distinctive advantages courtesy of the shared Commonwealth heritage of its members, historical trade ties, familiar administrative and legal systems, and the use of predominantly one language as a means of communication. To harness that distinctive advantage, as it pertains to trade, now and in the future, Commonwealth countries need to ensure a continuous increase in trade and development and resilience against global economic crises. And that rests inter alia on two important pillars: foreign direct investment and the cross-border trade of a country's own businesses. Regarding the latter it is in particular the SMEs that need to participate in the intra-Commonwealth and global trade to drive economic growth.

Identifying Opportunities for Investment Protection in a Post-Brexit Era,
(November 2018)

The seminar relates to a research project that is currently being piloted by Professor Andrea Bjorklund (McGill University, Faculty of Law) and Professor Yarik Kryvoi (British Institute of International and Comparative Law). It was held from November 5th to November 9th, 2018.

If you would like to participate, you can learn more about OGEMID and register here.

We are very excited to announce a virtual symposium on Artificial Intelligence (AI) in International Arbitration: "AI in IA." The symposium will run during the week of 24 September 2018. It will consist of a series of posts by a group of OGEMID members studying the impact of AI in IA, as well as professionals working in the AI world.

We are in the midst of a revolution created by artificial intelligence and machine learning. Entire industries -- and indeed society itself -- are being disrupted by this technology. The international arbitration community is not immune: the disruption affects not only IA, but the legal profession and the justice system as a whole. To take just one (important) example, automated decision-making is fast encroaching on the adjudicative functions traditionally performed by arbitrators and judges. In this series, we will explore some of the issues and the potential impact of AI in IA, and begin what we hope will be a fruitful collective discussion on the topic.

The discussion will be led by Eric Chang, Amy Endicott, and Omar Haroun. Paul H. Cohen and Sophie Nappert, who have both written and spoken at some length on this topic (on this forum and elsewhere), will moderate.

Eric, a frequent OGEMID participant, is a Principal at Chang Law, based in Los Angeles California. His practice focuses exclusively on international commercial arbitration and investor-state arbitration disputes. Eric has a background in civil law and common law and previously practiced in Paris, France, and New York, NY. Recently, Eric spoke about artificial intelligence in international arbitration at ICCA Sydney 2018.

Amy is an international dispute resolution advocate at Arnold & Porter, based in San Francisco, California. She represents both claimant and sovereign clients in investor-State disputes as well as commercial clients in arbitrations administered by the various major arbitral institutions. Amy too has recently spoken about the AI Revolution and its potential impact on arbitration, under the auspices of the Silicon Valley Arbitration and Mediation Center.

Omar, a recovering lawyer, is the co-founder and COO of Text IQ, a document review and due diligence advisory company using proprietary AI technology. After working at two major West Coast law firms, Omar founded Sportaneous, an award-winning consumer health company that used machine learning algorithms to improve fitness habits. After Sportaneous's acquisition, Omar served as the Chief Revenue Officer at Greatist and went on to work as the Managing Partner of Oxford Digital, a boutique innovation agency that worked with both startups and high-growth companies to launch and grow new digital products from the ground up.

Eric, Amy, and Omar will address some of the pressing and soon-to-be-pressing issues in the intersection of law and machine learning:

The future of AI in IA is not set in stone; it can and should be largely determined by the stakeholders themselves. In other words, your collective input is crucial to help guide this technology and its impact on the legal profession, users of IA, and society as a whole. The OGEMID community is an excellent place to begin. We hope you will all take part in this very important conversation.

Diego Brian Gosis (GST LLP) introduced and led a discussion on the ins and outs of "Damages in Investment Arbitration".

A summary of the discussion was published in TDM:

Prof. Andrea Kay Bjorklund and Daniel Litwin (both McGill) are leading an OGEMID (mini-)seminar on Corruption in International Arbitration which is also the topic of TDM 3 (2013).

Four panels bring forth key topics which underlie the debate about corruption and arbitration. Each topic will first begin with some brief introductory remarks:

This seminar focused on mass claims in investment arbitration, drawing off the jurisdictional decision in Abaclat and Others v. Argentine Republic.

The discussions can be found in the OGEMID Archive of July 2012.

The emphasis of this seminar was the question of Host State counterclaims, rather than the correctness or otherwise of the specific holding in Roussalis.

The discussions can be found in the OGEMID Archive of January 2012.

Are you an Associate or Student? Join our free Young-OGEMID listserv and discuss current affairs and career development with your peers.

Want to join the debate?

Did you know you can Browse and Search (full text) the entire OGEMID archive going back to 2002?